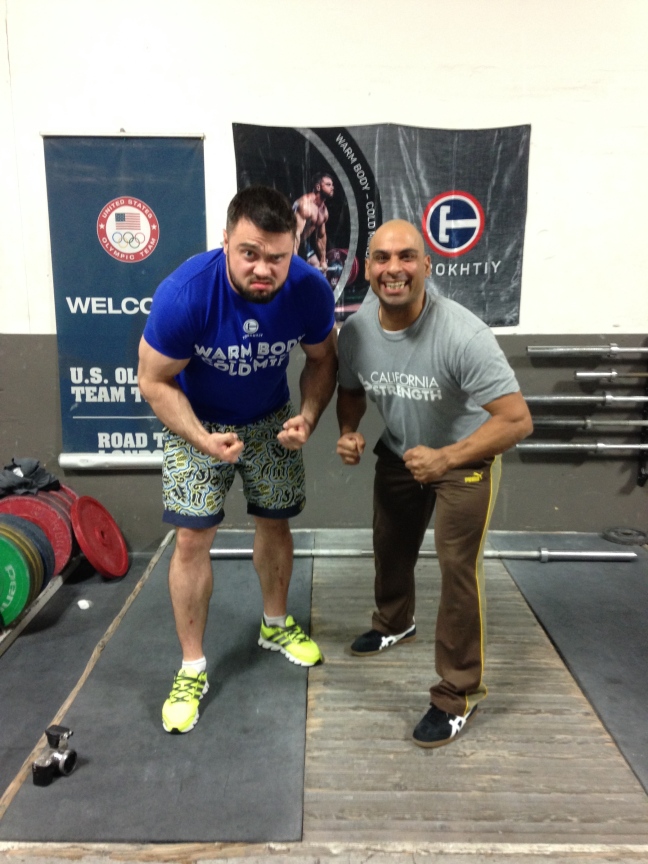 Coached up by  2012 Olympic Gold medalist Aleksey Torokhtiy was a tremendous experience last year in San Ramon at  California Strength Academy home of some of the best weightlifters in the country. Such as 2016 National Champion/2015 American Open Champion Wes Kitts 105kg+, Rob Blackwell 94kg, Nicole Lim 48kg, David McKellar 94kg, Stepahen Ngo 69kg and whole bunch of charismatic lifters and coaches such as Jon North, Donny Shankle, Spencer Moorman, Jared Enderton, coach Glenn Pendley and coach Ivan Ibadjiev.  When it’s time to step it up and push myself to be the best that I could be. I turned to David Spitz head coach and creator of Cal Strength. Dave a former competitive hammer thrower and shot putter on scholarship from University of Southern California turned weightlifter. Dave created a non profit organization called American Weightlifting and raised money to grow the sport and help other lifters wanting to compete at the highest level possible. Dave wanted to push himself to be his best so he brought in  Ivan Abadjiev to coach American Weightlifters. After finishing his weightlifting career Dave started coaching weightlifters and continues push his team to the top. I was able to train with Dave and his Cal Strength team for preparation of the  2015 American Open, I wanted the Extra push and A super competitive environment. I have always loved what Dave stands for which is a work your ass off and it’s about Winning on the Podium. Training at Cal Strength definitely elevated my confidence to have one of the Strongest Weightlifting teams support me and help me excel. It reminded me of my baseball days at Sacramento City where it was all about the State Championships and the daily GRIND of WHAT IT TAKES TO GET THERE, the bar was high. I made those guys work too!! When everyone works hard,the Energy is crazy intense and Great lifts and performances happen. I’m very thankful to Dave Spitz and his entire Cal Strength family for the love. Three weeks out from the American Open I strained an adductor and was limited on the effort of the clean and jerks and squats. I trained the best I could for what my body allowed me. I even contemplated not going, I am an all or nothing type of person. Especially when I was training with Cal Strength. I was in great position with my body,  my lifts were going up and  I ready to hit some planned Personal Records in the snatch and clean jerk. I contemplated not going because I was representing Cal Strength and that made me what to do my best ever and not my  doing my best would not sit with me well knowing that It was representing Cal Strength properly. Out of nowhere I decided to go and just do the best I could.  I competed and was coached by my really good friend Charlie Zamora and I came home with a total. During this trip to Reno, I recorded a total of 15 podcasts, worked the Caffeine and Kilos vender booth, helped coach 5 other lifters and got to meet the best of the best. I learned a lot and I  created great  memories and friendships. Sometimes just doing your best when it actually isn’t your  best can sometimes create lots of bigger opportunities. I really grew from the experience and have a better appreciation for me just doing my best on that day and then moving on. We can always make improvements in life and in the gym, if we stay focused and keep Working Hard and Believing in Ourselves.

I grew up playing baseball and lived everyday of my life wanting to play with the best. Whether it was little league or the majors it didn't matter as long as it had all the best players, all competing at the most difficult game of all baseball and at the highest level possible. I look for ways to challenge my mind and body. That is why I chose weightlifting. Weightlifting challenges the mind and body by having To become stronger. and using the mind by having to be so perfect in any attempt the snatch or clean and jerk. Focus is in great demand through the participation in the sport.